Now that my position has been cleared (hopefully), let us start.

Introduction:
What is Childline?
As Childline India Foundation’s (CIF) website says, “CIF is the nodal agency of the Union Ministry of Women and Child Development acting as the parent organisation for setting up, managing and monitoring the CHILDLINE 1098 service all over the country. CHILDLINE 1098 service is a 24 hour free emergency phone outreach service for children in need of care and protection. Childline is a project supported by the Union Ministry of Women and Child Development and linking state Governments, NGOs, bilateral /multilateral agencies and corporate sector.”

Essentially, Childline is a Foundation in which both the WCD Ministry as well as private (including so-called ‘civil society’) entities have a stake. 1098 is the toll-free emergency telephone service that can be used by anyone in India to help children needing care/protection. The list of NGOs with whom Childline has partnered all over India is available here (accessed in June 2016). Each district has at least one or more NGOs who operate this service and help children in distress. Childline operates in 372 cities and towns of India.

Childline India Foundation is also a FCRA-NGO with registration No. MH/83780693. The FCRA returns database contains entries of remittances from CIF to FCRA-NGOs which operate the 1098 telephone line in some districts. Whether such NGOs also receive monetary compensation from CIF (or from the WCD Ministry) for rendering this service is unknown in public domain (Readers of my blog hopefully, will remember my intense discomfort with RTI, so stay away from that recommendation).

Precis
Thus, operators of this service are the first responders in any emergent situation and thus have an enormous responsibility. In this Post, we shall examine the hitherto unknown/unrevealed/unrecognized foreign funded nature of a majority of Childline partner NGOs in the Southern States of India. As before, our definition of a FCRA-NGO is: a NGO which has a FCRA registration. We differ from the majority narrative about NGOs in India which is ill-informed and imprecise. We distinguish between NGOs and FCRA-NGOs; we believe that this distinction is vital and one which is ignored by the common public, MSM and ‘civil society’. This Post demonstrates that an overwhelming majority of NGO partners to Childline are FCRA-NGOs. Furthermore, a good number of them possess the characteristics of one specific religion and are likely staffed by its clergy.

Teaser:
Check out the extract from the Annual Report filed by a British Charity called “New Dawn India” (NDI for short) (Charity No.: 1001535) to the Charity Commissioner of United Kingdom, below. 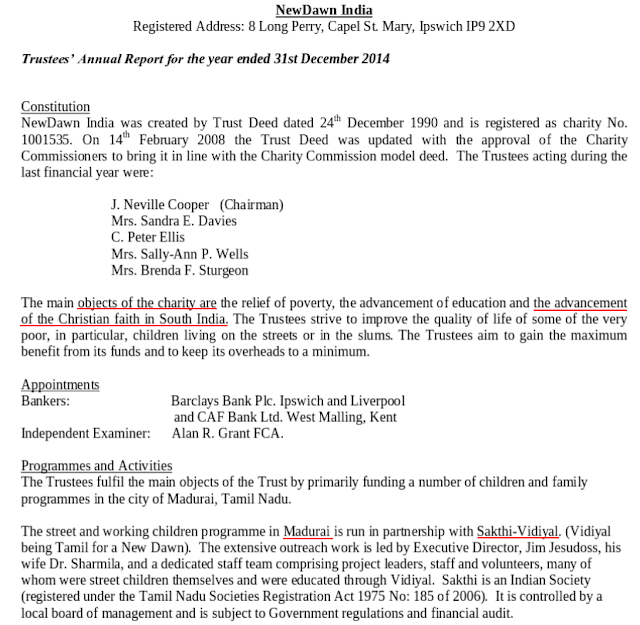 Apart from relieving poverty etc in India, this British Organization’s objective is “to advance the Christian Faith in South India”. The Report also adds that NDI funds an Indian NGO in Madurai called Vidiyal alias Sakthi-Vidiyal. (Note: New Dawn translates to Vidiyal in Tamil). We are also informed that Vidiyal is run by a couple, Jim Jesudoss and Dr. Sharmila.

Naturally, this caught our attention. Why should a foreign charity, with no direct presence in India whatsoever, mention about a Childline being run in Southern Tamil Nadu, in its Annual Report to the British Charity Commissioner? Isn’t Childline a Government operation in India? Even if it is not entirely Government owned/run, isn’t the Indian Nation Sovereign enough that its “civil society” can run societal aid work and not report them to foreign entities that they are franchisees of?

Who are the NGO partners to Childline?
Digging further, we find that the entity quoted as Sakthi-Vidiyal by New Dawn India is called “Sakthi” in the FCRA database. Its FCRA Registration number is: TN/75940362. It has been receiving somewhere around Rs. 60-80 lakhs p.a. from New Dawn India, UK, as per its FC6 returns filed with our Home Ministry.

Intrigued by this observation, we set out to examine all the “NGOs” with which CIF has partnered. Since the total number of such NGOs spread all over India was quite large, we limited ourselves to the examination of these partners in the five Southern states of India [Puducherry’s were included in the Tamil Nadu list].

The Tables (one for each State) at the end of this Post contains four columns. The first two columns were sourced from CIF’s website. They provide the district and the NGO partners’ name therein. The third, fourth and fifth columns were added by us, after studying the FCRA returns. They provide the FCRA registration number, the 2013-14 foreign fund inflow and the chief foreign donors of the NGO. Where the 2013-14 foreign fund amounts were not available, one from previous years has been included.

In Kerala, out of the 34 NGOs partnering Childline, 28 have #FCRA registration and 23 have a blue background and appear to ‘belong’ to a specific religious category. Whopping percentages, both.
In Karnataka, the numbers are 53, 35 and 14. The story repeats in Tamil Nadu where the corresponding numbers are: 66, 59, and 22. In Andhra Pradesh and Telangana, while a majority of partner NGOs are FCRA-ed, only a small fraction, surprisingly, has an explicitly religious character (of the specific type seen in other States).

In many of the above instances, the Childline partner NGO is part of a Religious Order. The personnel of the NGO are clergy themselves.

It can be anyone’s contention that a FCRA-NGO run by religious entities/personalities may not mix up their religious mandates with the 1098 operations. We certainly hope that they don’t. However, we do not know if this is really the case or not. At the least, the citizens of India need to be aware of the NGO partners and their nature.

In any case, should Childline partner with entities which receive foreign contributions via FCRA? Furthermore, does Childline ensure that such entities do not indulge in double dipping? (i.e., receive grants from CIF to operate the 1098 and submit utilisation certificates to CIF as well as file annual reports to their foreign donors on the NGOs operations in a district, including that on Childline). Do such things happen? I do not know. I hope not. But then again, we do not know.

The Childline NGO list and FCRA details can be obtained by clicking on each State below.

Please be polite in your comment. Please stick to the topic of the particular Post you are commenting on.

FCRAANALYSES
This blog and its analyses are protected by copyright laws. Use of these analyses, either in part, or in whole, without the permission of the Author is forbidden.